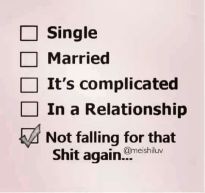 As it turns out, my “happily ever after” consists of me living alone and just having a side dick. That’s all I need. Since I kicked my husband out back in September of last year, I’ve been thoroughly enjoying having the apartment to myself. I don’t have to compromise on closet space or how much time I spend in the bathroom in the mornings getting ready for work. The apartment stays clean, and if the bills don’t get paid I have no one to blame but myself. Thankfully, the bills are always paid on time now that I don’t have a man-child to support. So I’m glad that I didn’t get the “happily ever after” that I thought I wanted.

I turned 43 at the beginning of this month. I took a 3-day trip with Redbeard to Gatlinburg, TN and even though it rained off and on the whole time, it was relaxing enough and it got me out of the apartment for a few days. I also learned that more than 12 hours with any one man is just too much for me.

Back in March, I told you about Redbeard and how I didn’t think it was going to work out with him, for a few reasons. Well, after Doc Oc moved away I was left with only Redbeard. Brendan Fraser had already faded away. Brendan texted me a few times, but I never made an effort to see him again. So once things settled down I started hanging out with Redbeard again on a weekly basis. Since I was concerned about him possibly being a mooch and just coming over for the beer and weed, I decided that if I didn’t offer any to him and he still kept coming around then I could make it work.

The sex with Redbeard is excellent. When it comes to that, I really can’t think of anything to complain about. I always get what I need, as does he, and then he goes home. I don’t have to wait around thinking, “Oh, God. Is he ever going to leave?” We sometimes fall asleep after, but then he always wakes up a couple of hours later and then leaves. That leaves me to watch the latest episode of Game of Thrones that was on earlier that evening. Come to think of it, I believe that as long as a man doesn’t throw off my TV-watching schedule, then we’re good and I can live with that. 🙂

One of the ladies at work asked me if I was going to drive 5 hours to go see Doc Oc. I told her no, and she asked, “Well, isn’t he worth it?” Again, I told her no. He’s cute and all, but the sex just wasn’t on the same level as it is with Redbeard. I told her that even though Redbeard isn’t rich or great looking, at least the sex is great and we can have a conversation before. (I’ll admit that he’s actually quite good-looking for a ginger-man. I still don’t prefer ginger men though.) It’s not like I’m trying to marry any of them. I just want to get laid and then send them home.

I also want to tell you about my job and the joys of working at a beauty school, but that will have to wait for another post. There’s just too much to tell.

One thought on “It’s all good”