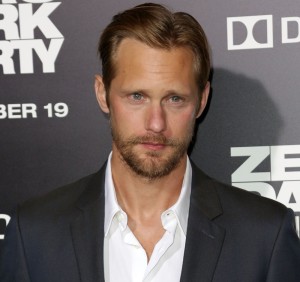 A couple of weeks ago I befriended a young man, Thord, on FetLife.  He had sent me a nice message and we had started talking.  He’s a 24-year-old  student at a nearby university.  I’m still not sure why he was on FetLife.  He doesn’t really seem to have any overt fetishes.  However, he is sort of a quiet straight-laced geeky type, so I can see how he may not be wiling to divulge his fetishes right away.  Physically, he is a good-looking muscular guy who, for some reason, reminds me of Alexander Skarsgård (Eric on True Blood).  He’s no Endymion, but he ain’t bad. 😉

We met Friday night for a drink at a nearby restaurant.  When I was on my way to the restaurant he sent me a text asking if I was nervous.  I told him that I was a little nervous and asked if he was also.  He said he was.  I contemplated replying with something like, “I don’t bite” or “Don’t worry…I’m harmless.”  Instead I chose to avoid lying to him and instead didn’t reply at all.

Once we were seated and started talking he seemed a lot more nervous than I was.  It probably helped my nerves that I was sipping on a gin & tonic, while he stuck with Sprite.  He doesn’t drink.  I find that kind of odd for a college boy, but I also find it refreshing.  I’m so sick of dating alcoholics.

I hate to admit it, but being 38 years old and sitting there with a 24-year-old hottie made me feel like the mac mama.  It wasn’t planned.  It’s not why I went to meet him, but damn if it wasn’t a nice feeling.  (Yeah, I know that any good therapist would probably say that I am going through a mid-life crisis or have self-esteem issues.  I’ll just add that to my list of issues.  I’ll leave that one up to the professionals.)

We sat and talked for a couple of hours and then decided to leave.  I was having a nicotine craving.  I also thought I should let him off easy since he still seemed kind of nervous.  When we got to my car outside we talked a little more.  I didn’t want to go because I really was enjoying being with him, but it was cold and late.  Then he said, “Since you’re always so honest (I know you’re probably laughing your ass off at that one), can I ask you something? Would you like for me to kiss you?”  Being asked permission to kiss me for the first time never gets old.  It’s such a gentlemanly and endearing thing to do.  Of course I said yes.  It turns out that for such a young and relatively inexperienced guy, he’s a really great kisser.  I even agreed to a second kiss.

Since I was cold and it was late, I decided I told him I needed to get in my car.  So he thanked me for meeting him, we hugged, and then we went our separate ways.  As I got everything in my car, hooked up my phone and turned on Pandora for the half hour drive home, I got a text.  It was Thorn.  It said, “Any last-minute thing you’d like to say or do? Haha.”  After a couple of texts back and forth he asked, “Would you like to come over to my place?”  I had purposely sat in my car and slowly got ready to pull out of the parking lot.  I kind of hoped and suspected he might ask me to come over.

I followed him to his apartment and once inside he got me something to drink and gave me a quick tour.  We continued talking and then started watching a movie while semi-cuddled up on his bed.  I didn’t want to pressure him into anything so I figured we’d just hang out and talk and watch the movie for a while.  He told me that it had been over a year since he’d been with anyone.  Poor boy.  That was just like putting a challenge in front of me.

It was fun and nice to just hang out, but my mind was racing.  If you’ve read much of my blog you probably can guess what happened next.  Be it right or wrong, thoughts of rescuing this boy from his island of celibacy, and showing him how great sex can really be became my top priority.  I tried paying attention to the movie, but my brain and my libido was in hyper drive.  My inner sex addict took over and my hands started wandering towards his thigh and then I leaned in to kiss him.  After that it was just a matter of minutes before we were going full steam ahead.  For one so young and inexperienced he was very good at reading my body language and following my cues.

I have to share a couple of the texts that he sent me today because they actually made me blush.  The first was kind of funny, but very flattering.  “I loved it. You’re so damn tight and you’re AMAZING at everything involving my cock – you’re a master.”  A master?  Wow.  Yeah, that made me blush all over. Honestly, I would have been pessimistic about that comment, but it’s not the first time I’ve been complimented on my skills…just not in that way before.  🙂

Preacher’s Daughter, Cock Master…I wonder if I could get contact cards printed with that on it. 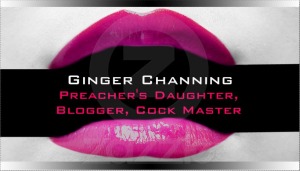 Oooh! Lookey! I can get cards! LOL