Hi everyone!  Well, I made it out alive & relatively dry in all the right spots.  It rained for nearly 48 hours straight.  Our front  yard turned into A River Runs Through It.  When Little Bubba came out on the porch while I was out having a cigarette, he looked at the front yard and said, “Look! A river! I wanna play in the river!”  Just in case you’re thinking I’m insane, yes, I went out for a smoke during a hurricane.  What can I say?  I’m dedicated to the things I love.

Thankfully, the store where I work didn’t flood.  We spent Tuesday afternoon getting everything off the floor because the downtown area here tends to flood.  The store itself has flooded twice.  Before we closed up on Tuesday evening, the rain was coming down so hard and fast that the back alley was already flooded and water was almost up to the bottom of the door.

Because of the storm I didn’t work Wednesday and Thursday.  So, for me, the things that were damaged most during the storm were my wallet and my sanity.  Spending two days inside the house with my sister, her two dogs, and my nephew is enough to test anyone’s sanity.

We did have some big tree branches fall around the house, and one big one broke a section of fence in the horse pasture.  The house and all the horses are fine though.  We were lucky.  I say lucky, not blessed, because we’re dealing with Mother Nature here, not the wrath of God.  It always irks me when people say they were blessed not to have blown away during a storm or had damage to their homes.  Do they really think God has time to pick and choose whose home to destroy?  I just don’t think that’s how God works.  So many people don’t even realize what they’re saying half the time.  If we’d stop and think about things…  There I go again getting all preachy on you.  Sorry about that.

Moving on.  Some areas close by were flooded pretty bad.  I tried to keep in touch with my friend in New Orleans during the storm, but due to power outages it’s been difficult.  Hopefully I’ll get to go down there soon and visit.  It seems like every time I make plans to go, something happens and my plans come to a screeching halt.

Even though I only lived in New Orleans for less than six months and it was hardly a peaceful stay, I keep feeling like I’m homesick for it.  Ever since I left I can’t stop thinking about how strange it is that just a few years ago I hated NOLA, now I would give almost anything to be able to move back tomorrow.

The people there are so different from anywhere else I’ve lived, including New York.  Sure, New Yorkers are tough and not nearly as rude as people think, just misunderstood.  However, the people in New Orleans are a whole other breed.  They are strong, passionate, welcoming, and eccentric.  I don’t even know how to really describe them properly.  Also, I know I’m generalizing here, but that’s kind of the point.  Overall New Orleans is a beautiful place filled with amazing people.

You’re probably thinking back to my post and poll (you can still cast your vote by the way) about where I should move to once I am able to get out of Mississippi. You’re probably also thinking that it sounds like I’ve pretty much made up my mind where I’m going.  You would probably be right.  I haven’t made any official decision yet, but I have looked at rooms for rent just to get an idea of what’s out there.  I can’t afford to live in the French Quarter like I did last time, but I still want to be within walking distance. 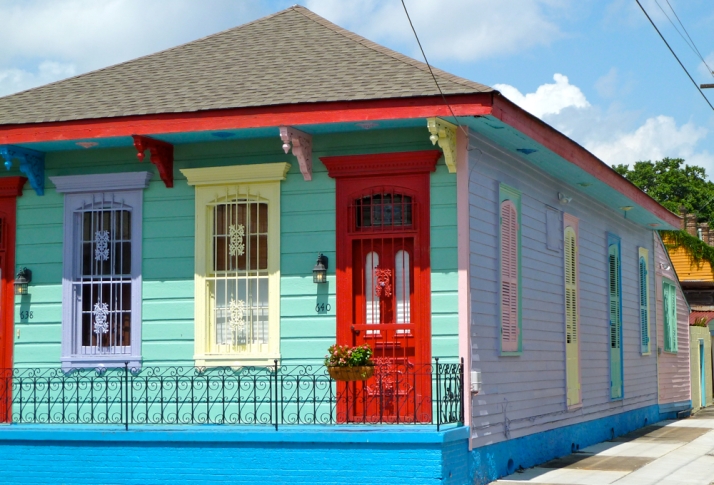 Seriously, who wouldn’t want to live in a city that has houses like this?

Another reason I haven’t officially decided yet is because I don’t know exactly when I’ll be able to move.  From our guesstimations, we have until the end of November at the very least before we have to move out of the house.

Did I mention that I’m at work today?  I am, and a boy band walked in a few minutes ago…wearing mix-matched cutesy plaid shirts and jeans, all blondes with “boy band” haircuts.  They are probably sixteen or so, and were looking for egg shakers.  One said they are recording this afternoon.  Sweet.  I can’t wait for that  mp3 download.

Until next time my friends.

2 thoughts on “It’s a colorful world”