I told you a while back that my sister met a man the day of the trail ride & crawfish boil.  He’s a cowboy of course, and a good bit older than her.  He was also very funny and flirty.  Just her type.  So a few days later she asked if I would babysit Little Bubba for a while so that she could hang out with him.  It turned out that all they did was go across the road to Dolly’s Cabin and “hang out.”  Of course we all know what that means.

She explained that it was the biggest one she’d never seen.  Yes, that’s right.  She said never seen.  Evidently the lights were off when things started getting hot and heavy and then she said what would become a running joke for us.  “It was huge!  I just didn’t see it coming!”

At that point I started laughing and the conversation continued to go further into the gutter full of dick jokes and cum-filled innuendos.  I almost wet my panties I was laughing so hard. 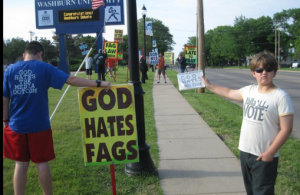 God Hates No One

A few weeks later we were sitting on the front porch one evening talking about a sign that a local church had posted in their front window.  It said “We welcome everyone including HOMOSEXUALS. Come Sunday for explanation.”  Someone had taken a picture of it and posted it on Facebook.  The local gay/lesbian community was not happy with it, and I can’t say that I blame them.  The church in question isn’t known for its tolerance towards people with views that differ from their own.  The tag line on their website says, “Come as you are, but don’t expect to stay that way.”  Unfortunately that should be a positive message, but it’s actually more of a testimony to how judgmental and controlling they are.  It should say, “Come as you are, but if you want to keep coming you’ll have to conform to our views of what a Christian should be (not God’s).”

So while sis and I were sitting on the porch and talking I mentioned that we should start our own church for freaks and rejects.  She was amused and halfheartedly agreed.  I was serious though.  I’m sick of so-called Christians thinking that people have to conform to their beliefs to be saved.  What about God?  Shouldn’t He be the one who we are worried about pleasing and conforming to what He wants us to be?  God loves everyone.  How do these churches expect to get people to come worship with them when all they do is judge and demean anyone who doesn’t meet with their approval?

The worst part was when my sister sent a text to an acquaintance of hers.  He is a member of that very same church, and even teaches several classes there.  The text she sent him asked about the sign.  He said that he did know about the sign, but wasn’t sure what the pastor was going to “explain” on Sunday.  Then came the kicker.  He said, “Personally though, I hate fucking fags.”  Wow.  There’s a shining example of a small town dumb-ass fake Christian right there folks.

Oops.  I started getting a little preachy there didn’t I?  Well, that’s alright.  You know why?  Because while I was waiting on my chicken fingers to be deep-fried at the local gas station/fried food emporium last week, I became an ordained minister online.  It took about five minutes and it’s legal in most states.  So now not only can I do wedding ceremonies, funerals and the like, I can also start my own church if I so choose.  Who knows.  Maybe I will do just that.  The Preacher always did say that he thought I was called into the ministry.  Maybe my ministry will be helping the freaks and rejects, like myself and my sister, have a place to worship freely without fear of judgement from anyone other than God.

P.S.  My sister drives me crazy in many ways, but I would never trade her for anything.

5 thoughts on “I didn’t see it coming”