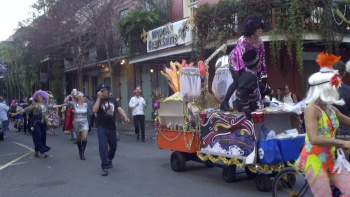 Today is Fat Tuesday and the end of Mardi Gras in New Orleans.  I can’t say I’m sad to see it go, considering my car got towed because of it.  I’m not shedding any tears.

My day started out great.  Manwhore and Troll left early this morning.  I was alone in the house, and was able to go out on the balcony to enjoy my coffee.  Then Art sent me a text asking if I wanted to go out for breakfast.  I of course said yes.  He sent me another text later saying that he was on his way and in full Mardi Gras regalia.  I had no idea what to expect.

About half an hour later he shows up and rings the doorbell.  I go downstairs to let him in.  I open the door and there he is.  Oh sweet baby Jesus.  I about lost my breath, wet my undies, and had butterflies come flying out of me all at the same time.  He was wearing blue jeans, boots, a black sleeveless t-shirt, a whip coiled and tucked into a belt loop on his right side, and a red military-looking jacket that had all kinds of stuff on it and a picture of a vampire on the back.  He looked like a damn rock star with all that plus his curly blond hair topping it all off.

He explained to me that it was his lion tamer costume, or as my sister later called it, his lioness tamer costume.  Get it?  I’m the lioness.  LOL  It probably took me at least five minutes to stop mumbling and stammering every time I tried to speak.  I think just about the only thing I could say was “wow” repeatedly.  Once I had recovered I of course just wanted to skip going out for breakfast and make him my breakfast in bed.  He was hungry though, so we went out.  (I’m still drooling just writing about him in that costume.)

As we were walking around, we walked through the back of Jackson Square where there were musicians playing and there was a woman in a belly dancer outfit doing something resembling a dance.  We stopped to listen and watch for a minute.

Someone tapped me on the shoulder.  When I turned around my face went pale and I froze up for a few seconds.  It was LL Cool Bean.  He said hi, I said hi, and then he said, “I thought you said you didn’t like crowds.”  Wow.  That’s all he could come up with?  He saw me standing there with Art, who was holding my hand at the time.  He gave me a weird look and then Art spoke up and told him that we were just going to get some breakfast.  I think I half-assed introduced them to one another.  Thank God for Art though, because he promptly led me away from LL.  I was petrified and at a loss for words after that, so I didn’t mention it again to Art.  I could tell that he knew what was going on.  So there was no reason to discuss it further.

While we were walking Art asked if I had plans for this weekend.  I told him that so far I don’t have any plans.  He told me that he goes to see his three kids every other weekend and asked if I’d like to go with him this weekend.  Hmmm.  I didn’t really know what to think of this.  I should have at least asked where he stays when he goes up there.  It’s five and a half hours away.  Without really thinking it through I said that I would like to go.  I panicked afterwards when I realized that he might actually want to introduce me to his kids.  That terrifies me.  Kids and me don’t always mingle well.  It’s always a toss-up whether or not they will like me.  Oh well.  Too late now.  I’m in for another interesting weekend.

After breakfast we came back to my place and watched some of the parades and rested our tired tootsies.  We cuddled a little and ended up naked again, but I still didn’t get all of what I was looking for, which surprised me.  I thought we had cleared things up, but apparently not.  My sister’s suggestion is to take plenty of lube and condoms next weekend, because if we stay in a hotel then I will have time to figure out what the real problem is.  She may be right.  I’m willing to try anything at this point.

So Mardi Gras is finally almost over, and now I have to try to calm myself down before this weekend.  Something that probably won’t help is that I’m supposed to go hang out with Art again tomorrow while he works.  Dear Lord, I hope he doesn’t wear that jacket again tomorrow.  I’d hate to have to molest him in public. 😉

Well, there’s an hour and a half left before they shut down Bourbon Street, and it’s time for me to get some sleep.