I know that’s probably not the best title for a Martin Luther King Jr. Day post, but then again maybe it explains a lot.  By the way, I know I’m technically posting this the day after MLK Jr Day.

When I was growing up in Alabama racism was not something I thought about often.  It was the South though and it was all around me.  Even then, back in the 1970s and 1980s, I knew it was there, but no one talked about it much.  It was more of how whites treated blacks.  It was usually subtle, but it was still there.  It was like the skeleton in the family closet…the secret that everyone knew about, but didn’t talk about out of shame and fear of what others might think of them.

Typical music that I would hear when riding around with my Aunt in her convertible VW Beetle in the summer.

Even dear old Dad, the Preacher, was a blatant racist for a very long time.  He was the typical good old country boy who worked from the age of thirteen in the family business.  When I was a kid he worked 12+ hour days with my Paw Paw in their welding shop.  They had about a dozen employees usually and a few were black men.

One man in particular, Bill, was young and new to the business.  My Dad was sort of hard on him and very critical.  I remember overhearing him talking to my mom about Bill one time.  Dad was complaining about how Bill was dating a white girl.  At the time it didn’t really phase me because I was used to that just being how people thought.  I didn’t really know any better.

I had black friends growing up.  My best friend in the sixth grade was a black girl.  It’s not that I disliked them, or was a racist, I just inherently knew how people felt about things like that.  I was too naïve to know I should or could ever think otherwise. 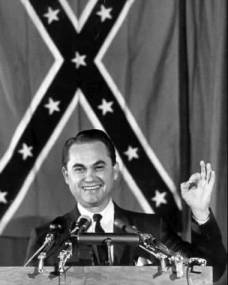 From 1971 to 1987 George Wallace was governor of the state of Alabama.  This meant that for 13 years of my life, there was a racist in the governor’s mansion.  You remember George don’t you?  He’s the one who said, “segregation now, segregation tomorrow, segregation forever.”

When my Dad became the Preacher in 1985 his views on things changed drastically.  This included his views on racism.  He no longer viewed himself as being better than anyone else, nor did he continue believing that segregation was the right way.

When he started preaching he would take us to different churches around our part of the state and several of them were black churches.  I know that’s not the best way to describe them, but that’s what I always heard them called.  I loved going because it was always so different from the churches that we normally went to.  The music was better, more upbeat, the people were friendly, and the sermons were fiery and interesting.

When I think back on everything I’ve heard and seen, it’s hard for me to believe that I turned out to be such an anti-racist.  Seriously.  Things could have gone completely different for me, but somehow I overcame my environment and grew up an open-minded person who believes we are all created equal.

What’s even better is that now I have an adopted little brother who is half-black half-white, I have dated just about every race there is, and I’m now in a monogamous relationship with a wonderful Creole man.  So not only did I turn out OK, my Dad managed to overcome his ignorance and came to believe as I do.  We may not agree on a lot, but this is something we definitely agree on.  We agree so much that we both have put our lives and safety on the line for our beliefs on this subject several times.  He even marched right next to Jesse Jackson once.  For the Preacher, the former racist good old boy, that was a major milestone.

Standing up for what is right and true is the most wonderful feeling in the world.  That’s the one thing that the Preacher has taught me that I will remember until the day I die.  Love knows no color, creed or race.  Thank you Daddy.

This was filmed only eight blocks from my new home. 🙂