I don’t write much about church which is probably odd considering that I’m a preacher’s daughter.  However, recent events have led to the church being on my mind a lot lately, much to my dismay.

I’ve mentioned in passing about the Preacher, my mom and little brother moving to another state.  This meant that the Preacher had to leave his small church that he pastored for the past fifteen years.  Even though everyone was sad to see them go, they believed that my dad was following God’s will.  To make sure that the church would be able to continue on, the Preacher asked a few preachers to come and be guest speakers in the weeks before their moving.  Before they moved the church voted on an interim pastor and to keep the Preacher on as overseer until the end of the year.  The main reason for the Preacher staying on as overseer was because the interim pastor would have a 90 day trial period, and the land, church, and loans were all in the Preacher’s name.  So once the interim pastor finished the trial period things would be completely turned over to him.

The interim pastor that the church chose is a young man who has never pastored a church before, but evidently everyone liked him and enjoyed his sermons enough to vote for him.  My family and I have known this young man for about 7 or 8 years.  My sister met him first.  She worked for him as a horse trainer and farm hand for a while.  He was close to her age and he used to come over to my parents’ house and play cards and dominos with me, my sister, and her then boyfriend.  I thought he was a really nice and cute young guy.  My sister had told me that he was a little strange about certain things and kind of a momma’s boy, but he was a good guy overall.

From what I’ve heard and pieced together here’s what happened.  Soon after my parents moved, the interim pastor, Momma’s Boy, went into the church office and started going through the books, the checking account mainly.  First of all, as interim pastor, he was not supposed to be doing this.  The church books are open for anyone to see, but only under the supervision of the pastor, or in this case the overseer, the Preacher.  The Preacher would have gladly shown this information to Momma’s Boy, or anyone else, if he had just asked.

Sometime after Momma’s Boy went through the checkbook he went to one of the older couples in the church, Mr. & Mrs. J, and accused the Preacher of stealing from the church.  By the way, Mr. & Mrs. J are the same ones who ran off the previous pastors because they wanted control over the church.  Right there Momma’s Boy made his second mistake.  He didn’t bother contacting the Preacher and confronting him with this disturbing accusation, he just went straight to Mr. & Mrs. J with his accusations.  From what I’ve heard, the Mrs. J claims to have come to the Preacher’s defense.  What happened after that though, makes me wonder how much she really defended him.

Before I go any further I’d just like to make it clear that the Preacher isn’t perfect.  He’s a man like any other with faults and imperfections.  However, he is not and has never been a thief, and to accuse him of stealing from the church and from God is just ridiculous.  And I’m not just saying that because he’s my father.  I have no grand delusions of my father being a saint or anything.

A few things happened afterwards that really pissed me off and were just wrong.  These supposed Christians were acting like jackasses and stuck-up snobs.

Momma’s Boy, his mother (Mrs. Boss), and Mr. & Mrs. J all got together and called the members of the church that they thought would be easy to control or on their side.  They were planning a church business meeting, but failed to tell all the members of this meeting.  According to the bylaws, when a church business meeting is scheduled, all members should be given at least one months notice.  It is to be listed in the church bulletins, and the Preacher always sent out text messages to everyone in the days leading up to the meeting to make sure that everyone knew about it.  Momma’s Boy and Mr. & Mrs. J completely disregarded the rules and set the meeting up so that only certain people would know about it.  Can you say sneaky, manipulative, and deceitful?  I can. 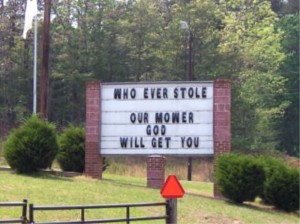 Helper, the man who has helped the Preacher at the church, at the mission, and has attended the church for the past several years had just gotten through cutting the grass at the church when Mr. J drove up.  Mr. J asked Helper where the old lawn mower was.  He was referring to an old lawn mower that the church had purchased 15+ ago, way before Helper had even started coming to church, and Helper knew nothing about it.  Mr. J then asked Helper about the lawn mower that was on the back of his truck and said that it looked a lot like the one that the church had.  Helper told him that it was his lawn mower that he had bought himself.  Basically the old man was implying that either Helper stole the church’s lawn mower, or that the Preacher had given it to him.  Neither is true.  Now that’s definitely one way to run off a good member of your church.  Insult them by accusing them of stealing a lawn mower.  When in fact, Helper is a faithful member of the church and volunteers to cut the grass for the church…for free.  That’s right, he doesn’t get paid to cut the grass.

Next, the woman who has taught children’s’ church, Mrs. Shorty, was booted out rather abruptly.  Mrs. Boss, bought new material for the children’s’ church program without consulting or asking anyone.  Mrs. Boss then made it her mission to take over the teaching of it.  Mrs. Shorty was told that she would no longer be needed to teach.  Talk about rude.  Mrs. Shorty has been one of the more faithful members and now her and her husband have decided not to go back since they no longer feel welcome there.  Mrs. Shorty was also one of the people who were conveniently left out of the loop when it came to the church business meeting.  She was tipped off however, and did manage to make it to the meeting.  She said that she could definitely tell that she was not wanted there.

According to my sister, who has known both Momma’s Boy and Mrs. Boss for a very long time, Mrs. Boss is a bit of a stuck-up snob with control issues.  It’s becoming more and more clear that Mrs. Boss is trying to weed out the so-called undesirables from her son’s new church.  Unfortunately, most of those “undesirables” have been the most faithful members and contributors in the church for many years.  In the end, they are only harming the church and themselves.

Where has the Preacher been during all of this?  Well, since he’s now two states away, he can’t do much.  He got a call from Mr. J’s son, Little J, and was asked where he got the money that he had contributed to the church.  The Preacher told him that it came out of his own pocket.  Then Little J asked where that money came from.  Not that it was any of his business, but the Preacher told him that it came from the various odd jobs he had worked and from his salary at the mission.  The mission is a non-profit organization that he has run for seventeen years.  Through the mission he provided food, clothing, emergency shelter, etc. to families in need in our area and around the country.  He did receive a salary from the mission, but rarely got one from the church because there just wasn’t enough money to pay him.

Little J then asked, “Well doesn’t all the money that the mission gets come from the church?”  That was laughable.  Seriously.  The church can barely pay its bills and he’s saying they’ve supported the mission for the past fifteen years?  OMGLOL  The Preacher didn’t know how to respond to such an outrageous claim so he just answered no.  When the Preacher told Little J that it was really none of his business where his money came from Little J had the gall to say that he had attended and supported the church for a month now and he believed that it was his business.  LOL  I don’t even know how to respond to that kind of absurdity.  Neither did the Preacher.

The Preacher and my mother have been very hurt by all of this and are still in a state of shock.  On the other hand, my sister and I are not shocked, we are just irritated.  Irritated because the people that we thought were friends have turned out to be just more of the same old conniving, control-seeking, lying types that have hurt our family too many times in the past.  And frankly, we’re not going to take it any more.

Our plan is to go to church on Sunday and see how we are received.  Since we are still only an hour away from the church and were told to come visit often, I’m curious to see how they react when we walk through those doors.  I also would like the opportunity to ask the new pastor, Momma’s Boy, to show me the proof of my father’s thievery.  I know he won’t have any, but I want to see him squirm.  At the very least he should be called out on his lies.  I’m not looking to start any trouble, only to have the truth come out.  He can’t slander someone’s name like that and expect to completely get away with it.  If the Preacher can’t be there to defend himself, then his daughters damn well will be there to do so.

Can I get an amen?

7 thoughts on “How to split a church”