It’s funny how when I stumble across people from my past that they can be almost unrecognizable.  It’s not because they look that much different, but because either my memory sucks or they just didn’t leave that much of an impression on me.  I recently came across a man who I went out with a long time ago in a far away place.  Something popped into my head and I couldn’t figure out why so I googled it and found him.  His picture barely rang a bell, but his name resounded like a gong in my head.

I’m sure that many men would agree that sometimes it’s easier to remember other physical attributes of short-term lovers rather than their faces.  One-night-stands are the worst.  I have had so many that one could walk right up to me today and I probably wouldn’t even remember having sex with him.  Sad, but true.  I never forget a great ass though.

When I was living up north I met a guy, online of course, who we’ll call Musicman.  He was a musician, obviously from the name, and a skinny little guy with blond hair and a nice tight ass.  He lived not too far from me and asked me if I would meet him one night at his apartment.  Here’s another shining example of the extent of my recklessness during those days.  I didn’t hesitate and told him when I would be over.  To be honest this was probably ten years ago and I can’t remember if we went out or just stayed there.  I do remember having sex with him.  My memory isn’t that bad yet.

Piecing together the memories that I do still have I can remember something about him taking me to a local strip club one night.  I also remember getting a lap dance in a back room from a very hot Venezuelan girl.  The memories that stay clear in my mind never cease to amuse and amaze me.  I digress though.  This is about him not her.

That first night he was telling me about his music and even though he was still young, he talked about the good old days of being in bands and wearing tight leather pants.  I laughed when he mentioned the tight leather pants.  Previously I had only seen gay men wearing them live and in person.  At that time he was really into the Moby type of techno music and his look seemed to fit.  He was very cute and slick with his gorgeous wavy blond hair, thin tight body, and trendy clothes. 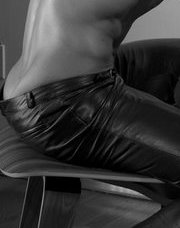 I think we only went out two or three times and we had sex each time.  Unfortunately the only time that I clearly remember having sex with him is the last time.  He had called and asked me to come over late one Saturday night and I did.  When I arrived he was wearing his black leather pants and a tight black t-shirt.  Hot does not even begin to describe how he looked that night.  Smoldering, sexy, seductive or nubile might be better words for how he looked.  I was instantly turned on.  He invited me into his apartment and we sat down on the couch for a few minutes.  I took advantage of his hospitality when he offered me a drink because it gave me another chance to admire how the leather pants clung tightly to his taut young ass.

We were sitting and talking on the couch when he made his move.  He pulled in close and started kissing me.  Before I knew it his tight black leather pants were unzipped and he was positioned on his knees on the couch and I took control.  I sucked and slurped until he couldn’t take any more.  Our clothes went flying as we moved to the living room floor.  We had sex right there on his living room floor as his techno music played in the background.  As an added bonus, he was packing major heat in those leather pants.  I was not disappointed.

When I look back on memories like this one I tend to only really remember the middle parts.  The beginning and the end of relationships like that are often blurry and incomplete.  I like to think that’s because it’s really only the good parts that matter.  Of course I try to learn from every relationship, good and bad, but I think I learn the most from the good parts of each.  What did I learn from that one?  That leather pants don’t always equal gay, and that sometimes it’s good to get out of the bedroom and have some kinky freaky sexy time in other places.

I’ve thought about Musicman maybe twice during the last ten years, each time with a smile on my face.  When I came across him online today and saw his picture I had the same response.  Even though he’s gained some weight, his hair is not as blond as it used to be, and he’s looking more country-pop than slick-techno-boyish these days, I still think of him fondly.  I wonder if he even remembers that night.  I wonder if he even remembers me.  If he does I hope he smiles when he thinks of it.  LOL  Who am I kidding?  Of course he remembers me.  My sexual fan club has more members than the U.S. House of Representatives and the Senate combined. 😉

It’s time for me to go take a cold shower now.

9 thoughts on “Days of Recklessness and Abandon”