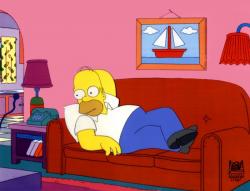 So last night Skaterboi and I were each lying on our individual couches and I jokingly asked if I could shoot the dog because she just wouldn’t shut up.  I was obviously joking.  Never in my life could I hurt an animal.  As much as I may not like them, mostly due to severe allergies, I’m not that cold-hearted.  He seemed to take it as a serious question replying, “I’d shoot you, bitch, before I’d let you shoot my dog.”  Now that was just uncalled for.  I got up and went to my office/sanctuary.

I’ll admit that I’ve been a little on edge lately because I haven’t had my hormone medicine for four days now because the damn doctor won’t sign off on my refill requests.  I called every day this past week and all her staff could tell me was that it was in her hands now and she’d “get around to it.”  WTF?!  I’m OUT of my medicine and she’ll “get around to it!”  When?  Next week?  Next month?  This is just crazy.  Doctors are supposed to be helpful and friendly, not ignore their patients needs. My pharmacy has faxed her for over a month!

I tried calling again Friday, but of course her office closes at noon on Fridays.  I didn’t know that.  I guess she has a lot of drinking to catch up on or something.  So now I have to go all weekend and probably Monday too without my medicine.  If I have to I’m just going to go to her office Monday and stay there until she signs the refill request.  It’s not like I’m trying to get pain pills refilled or anything, just medicine that gives me what my body should be making on its own, but thanks to this damn POF it doesn’t.  Without the hormones I feel like everyday is a menopausal nightmare.  My rant about the doctor is over. 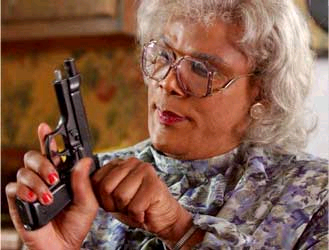 I need to get me a glock like Madea. LOL

Now back to Skaterboi.  Lately he’s been calling me “bitch.”  Even this morning when I woke up to him grabbing my ass, I heard him say, “Didn’t you hear me bitch? I said I love you.  Answer me when I’m talking to you.”  So I answered him.  I said, “I didn’t hear you, and don’t call me bitch.”  Then I pulled the covers back up over me and went back to sleep.  He waited a couple of minutes and then got out of bed.  Thank God.

I should back up a bit.  Last night after drinking four beers and taking my nite-nite medicine, I contemplated just sleeping here in my office.  It has a twin size bed that was here when we moved in.  I of course have it all made up nicely with a pretty quilt that my mom gave me.  Thoughts just started wandering through my mind about how nice it would be to just hop up in that bed and sleep so peacefully, not having to worry about being molested or God forbid, shot in my sleep.  At that point I think the beer was kicking in.  I imagined Skaterboi actually pulling the gun on me and me having to kick the screen out of the window and make a run for it.  Now I doubt there’s any chance that would actually happen, but his remark earlier in the evening made me wonder.

Why don’t I just leave, you may ask.  Good question.  First of all he is the one who rented the house.  I moved in afterwards, reluctantly.  Previously I was renting a room in a house from a nice woman and her boyfriend.  She was a little crazy at times and definitely an alcoholic, but she never bothered me.  She did have two dogs and a cat though and they had started peeing on the carpets in the hallway upstairs.  The smell was getting pretty bad by the time I left.  I stayed in my room mostly or was out-of-town, so I didn’t have to deal with it much.  It was cheap and I had satellite tv and internet provided.  Right now I’m wishing I had never of moved out.  Secondly, without much of a cash flow I’m having to try to stick it out here until something happens with my worker’s comp case.  That’s why I’m still here and putting up with his bullshit.  It makes for interesting blog material though.

Dr. Phil: What is wrong with you? Why do you feel the need that you gotta “get” somebody all the time?
Madea: Well when you gettin’ “got” and somebody done “got” you and you go “get” them, when you get ’em everybody’s gon’ get got.
Dr. Phil: Yea but you’re gettin’ the gotters when they didn’t do anything to even get you.
Madea: Yea but if the gotters get me I’m gonna get my glock.