I got back home Saturday after spending three days with my family.  I survived.  While I was there my sister and I were watching my nephew run off his sugar high and she asked how Skaterboi and I were doing.  She was puzzled as to why I had decided to move in with him and interested to know how things were working out.  “I’m just taking it one day at a time.”  That was my response.

Getting over my fears of being in a relationship again after Manwhore and Bobblehead Nerd has not been easy and it’s an ongoing process.  Not that they were the only bad relationships that I’ve ever had.  I’ve been married twice and neither worked out that great.  I’ve had far fewer long-term relationships than short-term ones and that’s been by choice.

Before my second marriage I was living in upstate New York with a former boyfriend.  I had dated Yankee Cowboy for about six months when he asked me to leave NYC and move in with him.  I was anxious about moving in with him, but decided to go through with it anyway.

My friends had offered to help me load up all of my things into the U-Haul truck that I had rented, but before I left we had a little going away party.  Yankee Cowboy had driven down to help also.  It was getting late, about 3 or 4 in the afternoon so we said our goodbyes and hit the road.  I was driving the truck and left a few minutes later than Yankee Cowboy.  I got as far as the parkway and then the truck broke down.  I made it to a parking area and found a nice lady that offered to let me use her cell phone to call U-Haul.  They said that they would send someone to come and get me and bring me another truck.  I waited, and waited, and waited.  Two hours later I was still sitting there in the truck waiting.

It was winter and it was dark and had started snowing.  I made my way over to a pay phone a few blocks away.  Once again I called U-Haul.  They told me that they couldn’t come and get me because I wasn’t supposed to be driving the truck on the parkway, but they would try to get a tow-truck to come and get me.  At that point I started to panic.  I couldn’t call my boyfriend because he didn’t have a cell phone either and I knew he wouldn’t have arrived home yet.  This is where I really started feeling like an idiot.  I hadn’t bought a lock for the back of the truck because I figured I would just be going straight to my boyfriend’s house and wouldn’t need one.  I am a bit of a penny-pincher sometimes.  This was not a good time to be a penny-pincher.

I was so afraid of leaving the truck unlocked on the side of the road with all of my worldly possessions in it that I opted to sit in the truck and wait for the tow-truck.  I must have walked over to that pay phone ten times during the night to call U-Haul and then my boyfriend, once he had enough time to get to his house.  The first time I called his house no one answered.  When he finally did answer and I told him what had happened his response was “Oh well, just let me know what happens.”  What kind of response was that?  So much for my knight in shining armor coming to my aid. 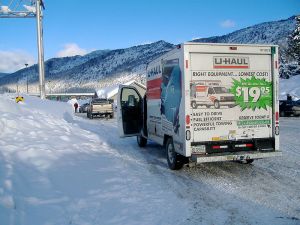 As I sat in the truck freezing my ass off and waiting a police car pulled up.  There were two cops that got out to tell me that I wasn’t supposed to have a truck parked there.  Well, gee, thanks for the info guys.  At first it didn’t seem like they were going to be much help either, even after explaining the situation.  They finally decided that instead of letting me sit there and freeze to death in the snow storm they were going to push the truck over to a shopping center parking lot with their police car.  We managed to get the truck moved and then they talked me into leaving the truck there, still unlocked, and I took a cab over to my friend’s apartment.

The next morning I went back to U-Haul, got another truck, had U-Haul go get the broken down truck from the parking lot and transfer all of my things into the new truck.  I was exhausted and stressed out and I don’t think I’ve ever prayed so hard as I did while driving up to Yankee Cowboys house.  I was so afraid that the truck would break down again.

When I finally arrived at his house it was late and  I was definitely still upset with him for not offering some kind of help the night before.  My mood quickly softened though once he sweet talked me into the bedroom.  After some much-needed stress relief I got up to go to the kitchen for a drink and to go to the restroom.  When I opened the refrigerator I saw a baby bottle sitting on the shelf.  I was bewildered to say the least, but went on into the bathroom.  There I saw makeup sitting on the sink counter that wasn’t mine.  I went from bewildered to furious.  What the hell was going on?!

I rushed into the bedroom and asked him why there were baby bottles and make up there.  He explained that his ex-wife and her baby girl had been kicked out of their house by her boyfriend.  Still I wasn’t happy with this explanation.  He continued to dig the hold deeper for himself.  She and the baby were staying in the bedroom upstairs for a while until she could find her own place.  Inside I was screaming and trying to talk myself out of killing him right then and there.  Eventually I calmed down and just accepted the situation.  I couldn’t leave.  I didn’t have enough money left after renting the U-Haul truck and moving up there, so I didn’t have much choice but to wait it out.

After about a month she finally found a place and left.  While she was there she would sit at the kitchen table with us every morning while we had our coffee.  I have never in my life ever felt so uncomfortable as I did sitting across from that woman every morning.  The feelings of anger towards them both, and the embarrassment I felt for letting myself get into such a ridiculous situation made me fear that I would never enjoy my morning coffee ever again.  Once she was gone though we tried to get back to just being a happy couple, but one thing after another kept happening and it eventually ended in my heading back South.

If I were as smart as I thought I was at the time and not blinded by “love” I would have recognized all the signs from above and never rented that damn U-Haul in the first place.  Then again, if I hadn’t of gone through all that I might not have ended up where I am today.  I’m not sure if God gets us to where he wants us to go no matter what road we choose to take or not, but it’s a nice thought.  No matter how stupid, selfish, ignorant, or in “love” I may be, God will hopefully get me to wherever he wants me to be.

6 thoughts on “One Day at a Time Sweet Jesus”